1. Quickly get to the first Home screen

Say, like me, you’ve gone a bit wild on the App Store and currently have a large number of apps installed. I have 101 apps, which means 7 Home screens to flick through. Your most important apps are on the first screen, right? Say you’re currently on screen 7, and want to get to the first screen. Simply click the Home button to jump there. Nice!

2. Flip between pages by tapping

Many iPhone apps feature a paging system with dots at the bottom of the screen, such as:

You probably know that you can flip between pages in these apps by swiping left or right across the screen. As an alternative, you can alsotap the areas either side of the row of dots at the bottom of the screen:

(I find that, with a bit of practice, tapping is slightly quicker than swiping, but your mileage may vary.)

Handily, there’s another quick way to pause the track. Just double-click the Home button, and a window pops up with iPod controls, allowing you to pause/play, as well as skip tracks and adjust the iPod volume: 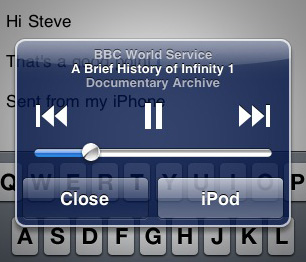 You can also tap the iPod button in the window to go straight to the iPod.

By default, this trick only works if an iPod track is playing. However, you can change the behaviour of the Home button double-click action by going to Settings > General > Home Button:

Choosing Home means that double-clicking has the same effect as single-clicking: it merely takes you to your Home screen. Phone Favorites – the default setting – brings up your favourite contacts for quick dialling. However, if you choose iPod then double-clicking takes you straight to the iPod app, regardless of whether a track is playing.

You can also use the iPod Controls setting to turn off the feature that displays iPod controls when a track is playing.

(If this doesn’t seem to work, go to Settings > General > Keyboardand turn the “.” Shortcut option on.)

Many keys bring up a list of other symbols or options if you tap and hold them for 1 second. For example:

8. Save drafts in Mail

With the Mac OS X Mail app, it’s easy to save your currently-edited message as a draft by clicking the Save as Draft button in the toolbar.

Saving a draft in the iPhone Mail app is a bit counter-intuitive. First, from the message editing screen, tap the Cancel button. You can then tap Save to save the current message as a draft, or Don’t Save to scrap the message altogether: 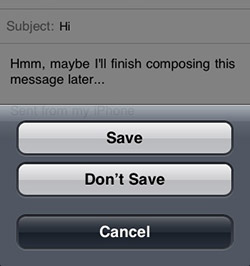 9. Jump to the top of the page

Flicking up and down to scroll through a Web page, an email message or a list of messages is fairly quick; however if you’re near the bottom of a long page or list it can take ages to scroll back up to the top. Thankfully there’s a quick way to return to the top: just tap the status bar at the top of the screen:

This works for most screens that involve scrolling.

iPhone ships with 5 icons in the iPod’s dock – Playlists, Artists, Songs, Videos and More – for quick access. However, let’s say you hardly ever watch videos on your iPhone, but you do listen to a lot of podcasts. iPhone lets you change the default dock icons, replacing the Videos icon with a Podcasts icon.

To do this, tap the More icon, then tap the Edit button at the top left of the screen. You’ll see a list of all available icons; simply drag an icon onto an existing icon in the dock to replace the icon: 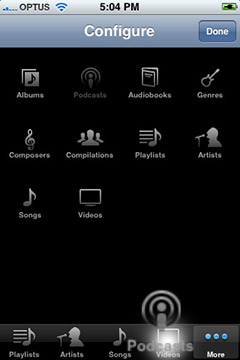 Tap Done when you’re done. Couldn’t be easier! (This trick also works in the YouTube app.)

11. Quickly zoom out in Maps

Pinching to zoom in and out in the Maps app is pretty neat, but can be a bit fiddly if you’re, say, walking along holding your iPhone. You probably know that you can double-tap to zoom in quickly, but how to zoom out quickly? Easy: tap with 2 fingers!

12. Save an image in a web page or email

If you want to keep an image you see in a web page or email message, tap and hold your finger on the image for 1 second to get aSave Image button: 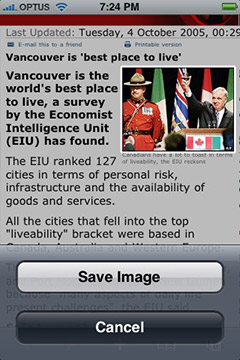 Tap the button to save the image in your Photos library, in the Camera Roll album.

Did you know the iPhone has a scientific calculator as well as the normal calculator? I didn’t, until one day I accidentally rotated my iPhone sideways into landscape orientation while using the calculator: 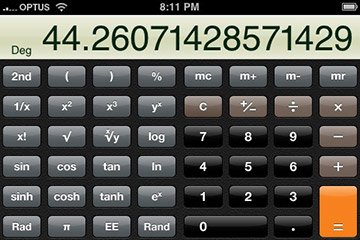 Many web pages contain frames that you can scroll through to view all their content, but Mobile Safari doesn’t give you scrollbars for frames. No problem: Just tap and drag with two fingers inside a frame to scroll the frame.

Finally, ever wondered how all these iPhone screenshots are taken? Simply press the Sleep/Wake button (the button on the top right of the iPhone) and the Home button at the same time, then release. The screen flashes, and your screen shot is stored in your Photos library in the Camera Roll album.