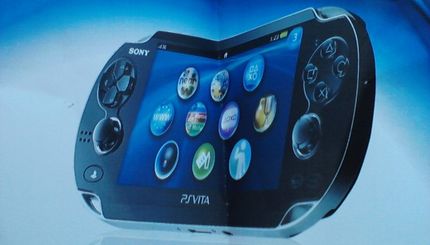 Sony has lifted a bulk embargo on pre-E3 NGP content, confirming the new Uncharted title as Golden Abyss and giving early access to the machine itself. ton of pre-E3 information pertaining to Sony’s NGP has gone live today, including the handheld’s specs and launch line-up. You can find links to absolutely everything from every site below. The system, which was officially announced back in January, will have the following games available day one:

Uncharted: Golden Abyss: Developed by Bend Studios, the game will contain the same sort of adventures and action you are used to with the series, as well as the intoduction of touch and tilt controls.
wipEout 2084: The game is set during the birth of “anti-gravity racing” and features a near-future environmentsand the ability to play against PS3 racers on WipEout HD Fury.
Little Deviants: This title contains a series of “madcap adventures” which will utlize NGP’s rear touch pad, touch screen, the motion sensor, and both the front and rear cameras. It contains augmented reality elements and makes use of the handheld’s microphone.
Reality Fighters: An augmented reality fighting game in which you capture yourself using the NGP camera andgo up against other fighters around the world.
Super Stardust Delta: The game uses the dual analog sticks, plus the touch screen and motion sensing controls.
Sound Shapes (working title): Play, compose and share with other NGP users with this “side-scrolling platformer.” In it, you will create music with your actions using the touch screen and share them with the PSN community.
Hustle Kings: Like the PSN version, only handhled and makes use of precision controls via the touch screen and rear touch pad.
Everybody’s Golf: ClapHanz has added touch and tilt controls to the game of golf which also includes online multiplayer.
Resistance Retribution: Since you will be also to play your PSP games from the PlayStation Store on NGP, start with James Grayson’s voyage across Europe which makes use of the NGP’s dual analog sticks.
Many hardware previews have also gone live today, telling of a console rather large in size with a 5? OLED screen. It has small face buttons, but, according to all reports, it doesn’t feel as big as it looks and it fits well in your jeans.
As revealed back in January, it has two analog sticks on each side of the screen, which, according to Ars Technica, feel a bit like the Dual Shock 3: it takes only “seconds” to get used to them.
The touch panel on the back is being reported as smooth, and you don’t notice it unless you are using it. It apparently allows for easy adjusting of the front screen’s size.
The system is backwards compatible with PSP games. So far, nothing is known of the machine’s final battery life.
NGP will release this year. Expect a lot more from E3.