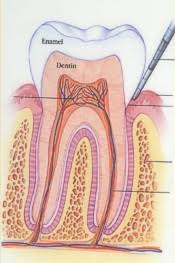 Gum disease is an infection of the tissues surrounding and supporting the teeth. It is often described as a sneaky disease because you may have it and not be aware of it. Gum Disease is a major cause of tooth loss in adults. The two stages of gum disease are called gingivitis and periodontitis.

Gingivitis causes red, swollen gums that bleed easily when the teeth are brushed. Because gingivitis usually doesn’t cause pain, many people don’t get the treatment they need.

Periodontitis develops if gum disease gets worse. The gums pull away from the teeth, leaving deep pockets where germs called bacteria can grow and damage the bone that supports the teeth. Gums can also shrink back from the teeth. This can make the teeth look longer. Teeth may become loose, fall out, or have to be pulled out by a dentist.

· Irritation and pain in the gums
· Bleeding
· Secretion of pus
· Swelling

If you don’t brush and floss your teeth every day, this food can big problem for you. The rotten bits of food cause a bad smell in your mouth. Rotten food also helps bacteria to grow in your mouth. This bacterium can cause gum disease, or gingivitis. Gingivitis also causes bad breath.

In addition to causing tooth decay, some of these bacteria contribute to gum disease. One type in particular, Fusobacterium nucleatum, assists other bacteria in adhering to the teeth and penetrating beneath the gum line.

Bacterial, viral or fungal infection arises in the gums and teeth produce acids and toxins that usually erode and cause inflammation of the gums. The inflammation makes gums swollen, red and spongy that increases the tendency to bleed and weakens the stability of the teeth by recession. Bleeding gums is more commonly seen in adults, since in case of children, it is mostly due to injury due to improper brushing. In case of adults or the aged, it is often found to be related with some disease. Females have higher incidences for bleeding gums than males.

It is quite easy to prevent gingivitis if you follow a few simple rules. Brush and floss your teeth regularly. Make it a habit to visit a dentist at least twice in a year for cleaning your teeth. Eat a healthy food with a diet rich in fibers. Avoid sweets and sugars that stick. Do not keep a candy in your mouth for too long. Make it a habit to clean your mouth after every meal or sweet that you have taken.

The goal of periodontal treatment is to control any infection that exists and to halt progression of the disease. Treatment options involve home care that includes healthy eating and proper brushing and flossing, non-surgical therapy that controls the growth of harmful bacteria and, in more advanced cases of disease, surgery to restore supportive tissues.
Surgical treatment may be necessary. Deep pockets may need to be opened and cleaned. Loose teeth may need to be supported. Extraction (removal) of a tooth may be necessary for advanced periodontitis so destruction doesn’t spread to adjacent teeth.