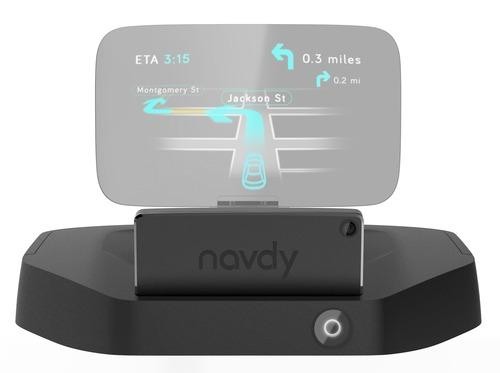 Many new cars are available today with a piece of jet-fighter technology called a “heads-up display,” a projector that shoots key data, like your speed or navigation data, onto your windshield, right in your line of sight.

Fighter (and some airline) pilots use HUDs so they can keep their eyes on the world outside while still monitoring their instruments. It’s safer and it lets the pilots process more information without having to shift their attention between the outside world and their inside displays.

But if you want a car with an HUD, you pretty much have to get a new car. And you have to pay up. HUDs are expensive options, often available only in packages with other high-end toys. They don’t do all that much, either.

Or you could look into the Navdy, a heads-up display for drivers that should be available early next year for $499. You can preorder it now for $299.

The Navdy gives you not just a heads-up display on car data like speed and navigation, but it also shows you who’s calling your mobile phone, what music it’s playing, who’s texting you, and so on. And you control it with gestures — like showing a thumbs-up sign to accept an incoming call. 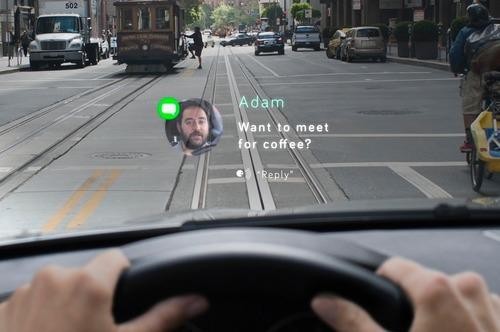 The gear
The Navdy device is a slab of plastic you attach to the top of your dashboard, right in your line of sight. There’s a small screen that information is projected onto, and you can see through it. It sits low enough on your dash that the data it displays should not appear to be directly on top of the car in front of you, although the screen is definitely in your line of sight.

The display is full color and looks pretty good. I tried a prototype, and it was easy to read, glanceable, and not intrusive.

The device takes power from your car’s onboard diagnostic port (OBD II), not the cigarette lighter. You have to run a wire around and under your dash to the port, but it’s easier to tuck it out of the way than it would be if you had to run it to the lighter plug that’s generally right out in front of everything. The OBD connection also supplies key data to the Navdy, like speed and engine fault codes.

The prototype I saw was attached aggressively to the dashboard of a demo car, but when the device ships it will come with a mount that lets you remove the Navdy from it easily (so you can stash it in the glove box or something). The power cord will stay plugged into the mounting base, so it should be easy to snap the main unit on and off. This should reduce the likelihood that someone will break into your car to steal the Navdy, but the mounting plate itself may end up advertising that you have one stored in your car somewhere. Remember the problem people had with GPS units: Even when they were removed and hidden, the telltale round suction cup impression left on the windshield told thieves that there might be expensive portable electronics in the car.

Inside the Navdy are an Android computer and a Bluetooth radio that links to your smartphone — Android or iPhone. But the idea is that you can stow your phone and use the Navdy instead for anything you’d need to do while you’re driving.

The experience
The video demo (above) of the Navdy is compelling. I did not get to try the software, unfortunately, or interact with the unit. The supercool gesture controls weren’t working when I tried it, and I didn’t see it displaying any media information or text data.

The Navdy will use Google Maps for navigation, I’m told, although it won’t, at launch, use Google’s traffic data. For playing audio, it will run Pandora, Spotify, iTunes Music, and Google Play Music. Support for other audio media (podcast players, audiobook readers) may come later.

What I saw was prototype hardware displaying directions on the screen in front of me during a demo drive. It showed good, clear, turn-based directions. And when a call came in, it moved the direction arrow off to one side to show me the Caller ID from the person calling.

The demo of the device’s screen and optics, while very impressive, wasn’t enough to lead me to recommend the device just yet. I’ll have to see this thing in action, and see how well it fits on top of a more car dashboards. 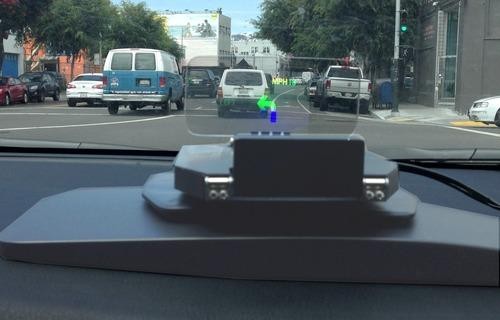 Worth it?
The great thing about aftermarket car electronics like the Navdy is that they generally do more and cost much less than getting the manufacturer’s built-in option for the same thing. Your smartphone’s free navigation app is almost always better than the $2,000 extra-cost navigation option you can get with a car, for example. The same is true with the Navdy: For under $500, you get a full-color, rather large heads-up display, with support for navigation, communication, and media — and with a really clever gesture-based control interface. In contrast, existing manufacturer-provided heads-up displays are generally limited to just showing speed and navigation. And for all that, they’re overpriced.

However, nobody’s going to break into a car to steal a built-in HUD, and you won’t have a wart of aftermarket electronics in your line of sight at all times with it, either.

I do not think the Navdy is a necessary piece of equipment for the modern driver. It’s useful and fun, and probably safer to use than a mobile phone, but a good high-mounted smartphone holder will get you part of the way there and for a lot less. That said, if you feel the need to do a lot of smartphone work while you drive, and you’re not about to get a car with Android Auto or Apple CarPlay built in, this looks like a very clever gadget.