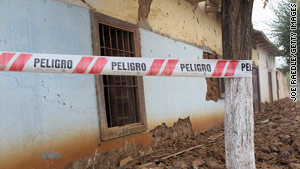 Vicente Nuñez, director of the National Emergencies Office, appealed to Chileans to remain calm, saying there was no danger of a tsunami.

There were no immediate reports of injuries or significant damage, he said.

Both quakes were centered 35 to 45 miles north of Concepcion, which was heavily damaged by a massive 8.8-magnitude earthquake on February 27.

Aftershocks have continued to rock Chile — at least seven of magnitude 5.0 or above since Sunday.