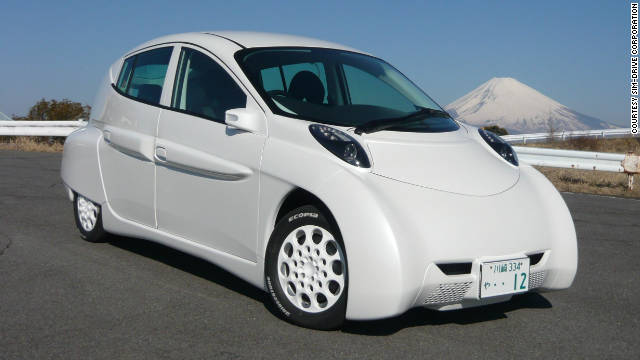 There may have been more alluring electric cars on display at this year’s Tokyo Motor Show, but the beauty of this prototype lies in its performance.

The SIM-LEI can travel 333 kilometers (more than 200 miles) on a single charge, say its Japanese creators SIM Drive, and it also boasts supercar-like acceleration — 0 to 60 mph in just 4.8 seconds.

The key to these remarkable statistics lies not, as you might expect, underneath the hood but in its wheels.

Most electric vehicles house a single motor in the area vacated by the petrol engine, but the SIM-LEI has four motors, which fit in the hubs its wheels.

Each one delivers 65 kilowatts, giving the car a total output of 260 kilowatts, compared with the 80 kilowatts of output available in, say, the Nissan Leaf.

A 24.5 kWh battery sits below the floor along with inverters and controllers, which fit into a unique steel monocoque helping reduce weight, according to SIM Drive.

The SIM-LEI — LEI stands for Leading Efficiency In-Wheel motor — took 15 months to complete and builds on advances made with the fantastic-looking Eliica — a super-fast eight-wheeler designed by SIM Drive CEO and President Hiroshi Shimizu.

His latest design may not look so sporty but the SIM LEI does come with low-friction tires and a low-set chassis, which helps reduce drag, says the company.

“Motors have become more powerful for their weight and the volume they take up, which has made it more practical to get very good performance from putting electric motors directly in the wheels of cars,” Widmer said.

“If you do put an electric motor in each wheel then there are huge possibilities with things like traction control and stability control,” he added.

While car makers including Peugeot and Mitsubishi have used in-wheel motors in concept cars that have never been commercially available, SIM Drive hopes its four-seat sedan will go into production in 2013.

SIM Drive says the price will depend on how many it makes, but if the car ends up being mass produced, customers can expect to pay around ¥2.5 million ($32,000)