Inside its domed sapphire case, a spinning 288-sided diamond represents the moon, which orbits around a hand-painted model of the earth as they both rotate around the centre once every 20 minutes.

Meanwhile, the brains of the watch – a part known as the tourbillon – projects out in another direction, spinning across three axes simultaneously, while a revolving watch face on a fourth arm completes the celestial choreography.

Such showmanship doesn’t come cheap, costing more than half a million dollars (£370,000), but it illustrates how independent watchmakers are attempting to push the boundaries of a centuries-old craft.

“Without today’s technology we could not do a watch like this, it would be impossible.

“But then everything is made by hand.”

Jacob & Co is also showing off lower-priced creations in Basel 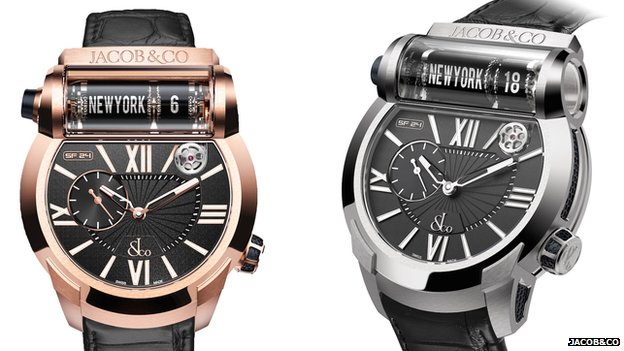 Jacob & Co is one of the biggest privately-owned firms at this year’s Baselworld trade show.

At the other end of the scale is 4N – a one-man operation consisting of Francois Quentin, a former designer for Louis Vuitton and Tissot.

He calls his watches “digital” because they tell the time by displaying digits in a central rectangular box.

But the mechanical mechanism he uses to achieve this is brain-achingly complex, requiring 540 components, each finished and fitted together by hand. 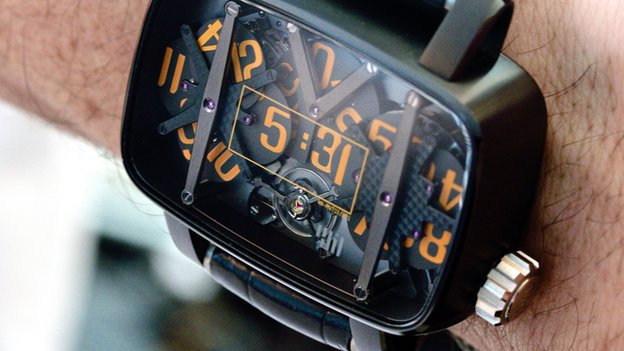 “To make each watch I need two months to assemble it and one month to test its 10-day power reserve.”

A combination of new materials, PC software and Computerised Numerical Control (CNC) manufacturing machines – which use lathes, mills, grinders and other tools to convert graphic files into physical parts – let today’s watchmakers do things their predecessors could only dream of.

But it’s the smaller firms that appear to be taking fullest advantage of the opportunities.

“The independents are able to do things that haven’t been previously tested because they don’t have as much to lose,” states Ariel Adams, editor of ablogtowatch.com.

“The large brands have core consumer bases that are oftentimes not as receptive to new ideas.

“So, they are concerned about putting too much money into research and development or changing the nature of how people perceive their brand.

“But the independents really assert themselves with innovation and that is how they stand out.”

Geneva-based MB&F – which describes its products as “machines that happen to give the time” – has played a leading role in this movement. 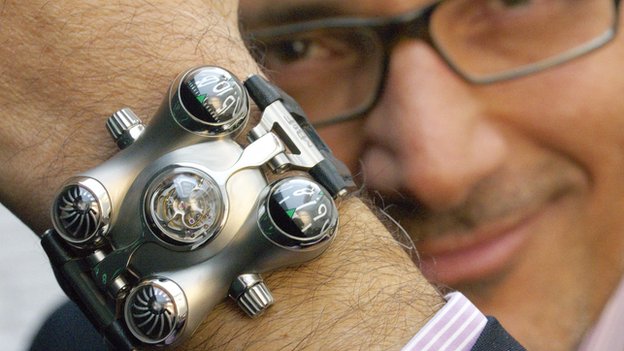 Its Space Pirate watch, for example, looks more like a futuristic interplanetary vehicle than your typical timepiece, with five bulbous growths rising out of its curved metallic shell.

The company says it’s not by chance that its creations don’t resemble those of the mainstream watch groups.

“It’s about optimising a movement, adding a new function or whatever.

“Once that movement has been designed they call in the designers who put a nice case around the movement and they might call in the marketing teams to sell the piece. 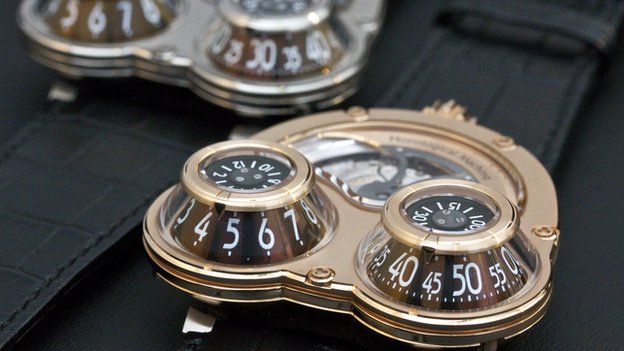 “At MB&F we do exactly the opposite.

“We start with an idea, and from that idea stems a design, and last but not least the engineering serves the design.

“That’s why the pieces turn out so different.”

It’s just launched a new version of its oil-filled Type 3 Watch, which features a temperature gauge to warn the wearer if the liquid inside is too hot or too cold. 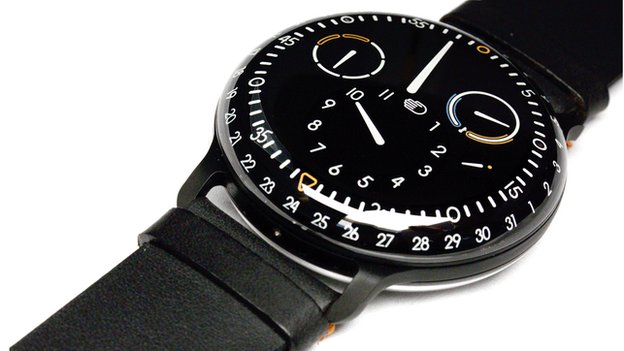 The use of black oil creates the illusion that the dials are floating on the outside of the device’s crystal case, somewhat like the graphics of a high definition smartwatch, when in fact they are mechanical parts.

Temperature is important, because at lower than -5C (23F) or higher than 60C (140F) the tiny bellows that regulate the liquid’s flow stop working.

Ressence’s founder Benoit Mintiens says the distinctive design was a consequence of his background as an industrial designer. 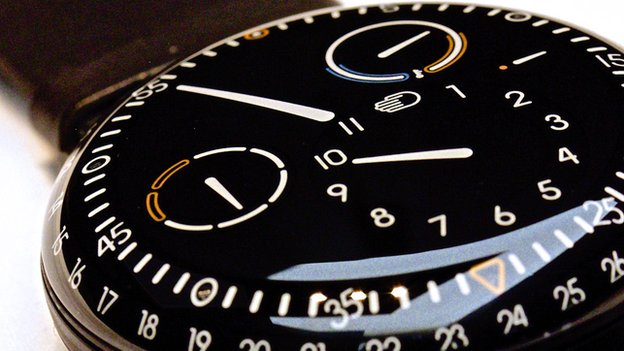 “A watchmaker will always start with a technical issue related to movement that they want to solve mechanically,” says Mr Mintiens.

“But an industrial designer will think who is going to wear it and what should it do for them, and then will steadily build something to make the functions the user needs.

HYT is another indie experimenting with liquids.

Its limited edition watches use tiny reservoirs of coloured oil and water that are forced into thin tubes, which it calls capillaries, to provide an unique way of displaying the time.

“The fluidic module system is sealed 10,000 times stronger than the waterproofing of a regular watch,” explains its chief executive Vincent Perriard.

“That is crazy. Why? Because we don’t want to have any micro-liquid evaporate.”

To be successful, such indies do not need to sell huge numbers of their product. 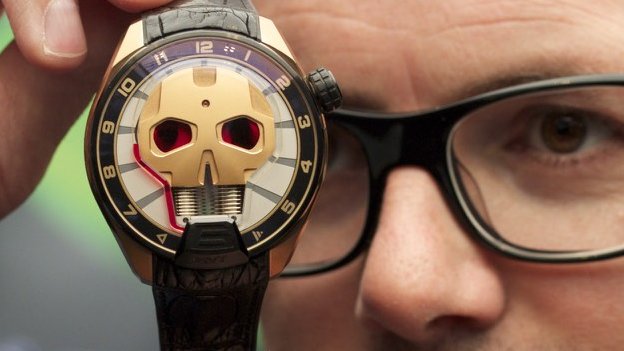 The Swiss firm is best known for its “novelties”. 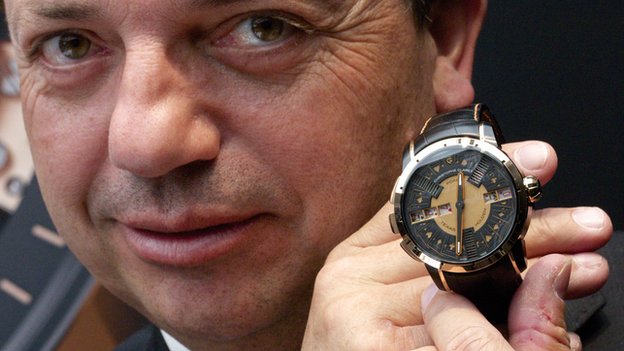 They include mechanical watches on which you can play Texas Hold’em poker, Blackjack and Baccarat.

Its latest, Aventicum, uses mirrors to create the illusion of a gold bust of the roman emperor Marcus Aurelius rising up out of the watch on one side, and five mechanical chariots that race against each other on its reverse. 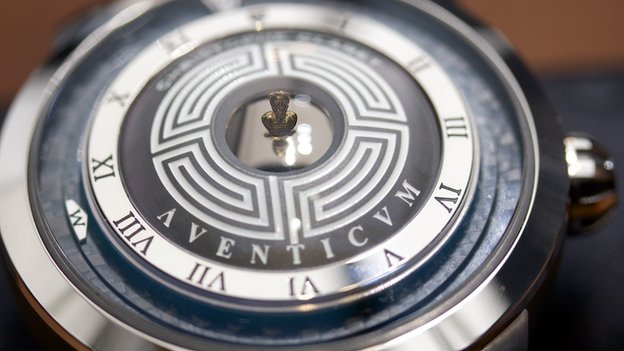 “When you are a little brand it’s not easy sometimes because we make a very low quantity – perhaps only 100 pieces a year,” says Mr Claret.

“It’s as if we are the mouse and the other brands are elephants.

But the mouse can do many things and move fast, and sometimes the elephant gets afraid of the mouse because what we do can be very strong.”

Other indie watchmakers unafraid to do things differently include Fiona Kruger from Scotland.

Her Celebration Skull watch is inspired by Mexico’s Day of the Dead festival, and features tubing that glows in the dark. 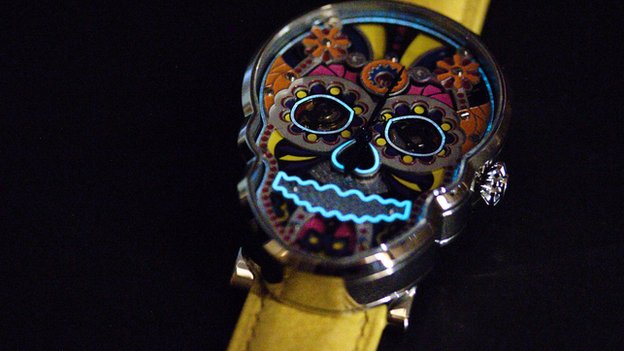 “My design process is quite selfish, as I design something that speaks to me first and foremost,” she tells the BBC.

“Why not have fun and express your personality?”

Cabestan takes a different approach, asking its customers to customise its atypical designs. 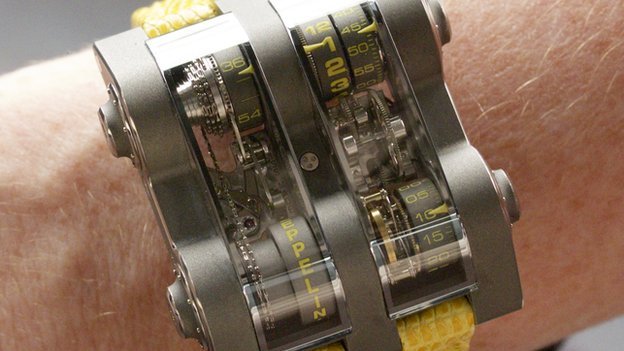 Recent examples include a buyer who requested his watch be made in a yellow theme, and another who asked for his name to appear on the parts.

This time-intensive process means Cabestan only makes about 40 watches a year, but it can carve out a profitable niche by charging £140,000 for the unique pieces.

“We have a CNC machine, we have everything in-house, so we can do everything – and we are proud to do everything,” declares the firm’s marketing director Carine Masson-Barillot. 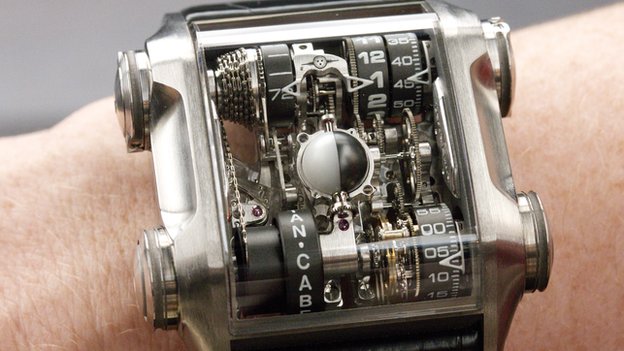 If there were an award for being the noisiest indie at Baselworld, US-based Devon Works could lay claim to the prize.

The clicks, ticks and whirrs of its watches are produced by the motor-driven movements of the glass-reinforced nylon belts that whizz in different directions inside them.

The electrical-powered devices use a microchip and optical recognition sensors to ensure the equipment shows the right time, making quite a statement.

The firm’s acknowledges that, like many of the indies, its designs might not appeal to mainstream tastes, but is unapologetic about the fact.

“But it influences the future of what’s possible in watchmaking design and engineering.”